skip to main | skip to sidebar

Did You Miss Me?

Have been spending most of my efforts on the actual website and twitter lately.  2014 was a rough year in that you may have even noticed the SWCfootball.com website as dormant during football season last year.  Long story - but the space industry is tightening its belt and I was focused getting a project in the best position to hand off if necessary.  Fortunately, it did not happen!  I have been reconciling the 2014 page (as time permits) with all the notes I had saved.  It will eventually be complete for the sake of prosperity).  I have already completed the 2014 Uni Tracker.

More importantly, I have been heavily involved in the 2015 page - and what a year of college football it has been!  I have devoted my Saturdays to enjoying it and watching most games by former SWC teams.  The current page includes a 20 Year Look Back at the last official SWC football games.  Yes, it has been 20 years since the greatest football conference ever folded.  Almost to the bottom of the left column you will find game summaries and personal antidotes for each SWC matchup in 1995.  They are not all there yet, I am up to 11/9/95.  I did not start these until the Oct/Nov lull between SWC matchups this year.

As mentioned above, I have also been heavily tweeting on @SWCfootballNow trying to build followers on that account (it pales in comparison to my over 1200 follower space twitter account).  It has been a fun year and I have been a bit wordy on my mini blog posts in the middle column of the SWCfootball.com site so havenot needed to do any expanding on those entries here on the blog.  This blog page will focus more on special events, big uniform news, or interesting memorabilia finds related to the Southwest Conference that need more explanation on their back story.  Or I may start just publishing here when I make big updates to the site.  I may also add a few backdated posts here to cover the bea-u-ti-ful throwbacks we have had this year and the lack of crappy Texas Tech one-off unis this year (they finally listened).

Seriously - go here!  There is more than enough to entertain your nostalgic love of the Southwest Conference there for now.  I constantly add to all areas of the site.  FYI: there is also a complete uniform 101 for this year in the right column below the virtual standings - it is called "In the Wash".
Posted by Susan N. Freeman at 10:35 AM No comments:

Looks like SMU will finally be back in blue on Oct 5th per this video. Blue has been see rarely since June Jones came on board and plenty of SMU fans have been singing the blues.

So... will it be the more unique Yale blue of the Pony Express era? Maybe the darker blue that seemed to come along after the 1983 Cotton Bowl when the Bowl mistakenly ordered a darker shade? Or just that plain old more royal blue from those recent photos? Their current blue is likely the effect of Nike not often making "special" colors for teams - it's usually pretty much their way or the highway.   Those early 80s jerseys didn't have stripes. Since the video does say "present meets the past", I am guessing they won't wear stripes on the pants... bummer. Unless it is a throwback uni to honor Dickerson and the 1983 Cotton Bowl team who were 1982 Southwest Conference Champions. Oh crap, I hope Craig James isn't there... I have REALLY enjoyed him being SILENT!  It will be good to see SMU back in blue - hopefully they will win and June Jones won't toss the blue again! The consensus of the comments on several boards is that SMU fans want the blue and want the separated stripes on the helmets and pants back!
Posted by Susan N. Freeman at 6:52 PM No comments:

Nike and No SMU Whiteout

For four years in a row SMU has worn all white in the home opener which includes the fans for a whiteout. Tech was expected to wear black for a blackout. However, Nike didn't get SMU's white jerseys ready in time so SMU was forced to wear their red jerseys.

Come on, Nike.  Since SMU does the whiteout every year for the home opener, it's not like someone didn't know when the whites would be needed.

No problem said SMU athletics - the red jerseys look great. Only problem is the fans were now dressed supporting the Red Raiders who wore all white and a new white helmet similar to the black version that was part of the uni reveal. Not too sure about the all white look... The hash tag war (#WreckEmTech vs #WreckTech) goes to Tech with their WALK-ON FRESHMAN possibly star QB and new coach as they dominated the game after both teams started slow.
Posted by Susan N. Freeman at 6:58 PM No comments:

At a recent card show ( my first in almost 20 years), I saw this 1949 beauty of TCU legend Sammy Baugh! I never knew these old Bowmans existed for football.  I love the printing on the 1949 Bowman cards. 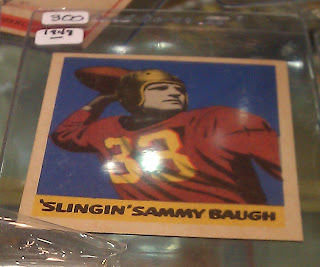 At TCU, he led the Horned Frogs to two Bowl Game victories: 1936 Sugar Bowl and the inaugural Cotton Bowl.  He was drafted in the first round (6th overall).  That one year contract made him the highest paid player on the team. In his rookie season, he led the Redskins to a win in the NFL Championship game.  In the NFL, not only was he the quarterback, he was an awesome defensive back, and maybe one of the best punters of all time.

That example above is pristine and has exquisite color with no overprinting. I couldn't afford that one, so I found a more affordable card to buy - Texas Bobbie Layne (also a SWC legend). 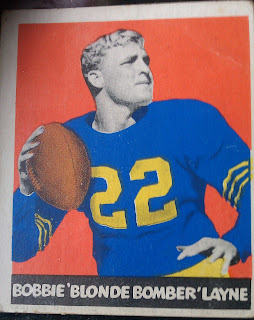 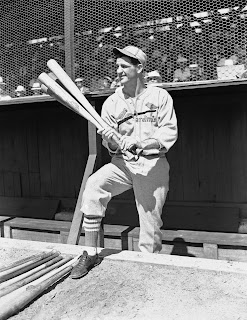 A recent post on Uni Watch, came up with a new photo of Sammy Baugh I had never seen nor had any idea about. First off, what a gorgeous photo - make sure you enlarge it and enjoy the details.  Second - I confess I don't think I knew he also played baseball.  As it turns out, he played baseball at TCU as well - AND THAT IS ACTUALLY WHERE HE GOT THE NICKNAME SLINGIN' SAMMY BAUGH! Not from football... Holy crap!

Turns out after his rookie year in the NFL, he wasn't convinced football was his best sport.  He signed a contract with the St. Louis Cardinals.  Unhappy with his little playing time in the minors (because he was converted to a shortstop and played behind Marty Marion), he went back to the NFL.

The two sport "slinger" made the forward pass and integral part of the NFL.

Lots of good stats are here.
Posted by Susan N. Freeman at 9:24 AM No comments:

So as expected, prices were a higher than expected at the auction since Darrell Royal died last week… ESPECIALLY on the cheaper items that were supposed to go between $100-200.  The expensive things like Texas and US flags flown to the moon stayed around the estimated bids (if not a tad lower).  But the little things - the opportunity to have something the legend owned.  And I can't ignore his 2005 National Championship ring - it did go for a shocking $105,000.

It is interesting to see the unsigned items that went higher than you would think.  A book with a signature about $250 – but make it about the Longhorns and it went for $650, programs from games he coached even higher… A couple of odd desk items that were expected to go for 100-200 went for prices like $1700 or $2250!  If it had a longhorn, his initials, or was burnt orange – the price went up!  I would love to do a spreadsheet categorizing the items that went for so much more than expected.

Here is a short run-down of the things that were eyebrow raising!

The audio recording of the party with Charlie Duke and Willie talking about what it would be like to be on the moon. I so want to hear this – hope the buyer makes it public! (60-150=$425)

The auction website - browse through - it's fun!
Neat article about Auction - with photos.

Posted by Susan N. Freeman at 8:59 PM No comments:

We lost a legend on November 8th.   It was a A sad, sad day for me, longhorn fans, SWC fans, and football aficionados across the country. Even Aggies expressed some love! The UT tower was lit solid orange Wednesday night in his honor.  I know my dad is having some lively conversation with him right now! 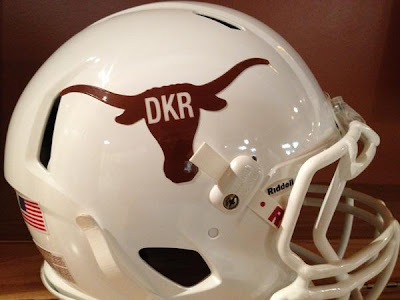 But, how fitting is this!?! I would have to say, they nailed it!

He changed football forever with the wishbone, but Darrell Royal "created" the iconic helmet longhorn (see here for details from a previous blog of mine) that is still unchanged to this day! Bravo!

Are you effing kidding me?  Texas A&M rolled out of the locker room last weekend wearing all black. Oh excuse me, the helmet was black fade to maroon.  Okay, black doesn't even fade to maroon. Stupid.  Glad I was doing an art show and did not have to watch this travesty.

Only one word can describe this - sacrilege!  Hey - I like black unis, Red Raiders look spectacular in all black - BECAUSE IT IS ONE OF THEIR SCHOOL COLORS!  BFBS (black for black sake in uni-watch ease) is out of control.  With the exception of the blue field, you can't tell who any of these teams are in the photo above with a quick glance.

But enough of that - let's talk about the helmet.  I love the Texas outline idea - but how poorly done could this be?  The logo is so big you lose the southern tip of Texas. The reversed side is better.  The holes in certain helmets also lose part OF THE SCHOOL NAME.  You can tell by the bad photograph that HGI took, they don't even care what it looks like.  Graphic design is about design.  Not letting some intern slap some oversized crap on there - anywhere on there.  Make the logo smaller, lay it out so it is ACTUALLY readable, and it would have looked a heck of a lot better - except of course, for the black...
Posted by Susan N. Freeman at 10:09 PM No comments:

Still bitter about the demise of the SWC and appreciative of all the years of joy it gave me and my dad, I started southwestconferencefootball.com. I hope to be the number one source of all things SWC Football. Data, photos, videos, and collectibles...

I have a small yearly blog of quips on that page, but this is my place to elaborate more and maybe even feature various collectibles or bits of data.